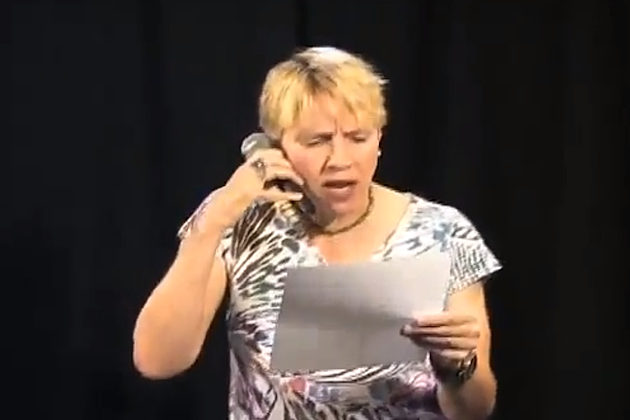 "Hello? What's that? You're depressed? Good thing you called me on this microphone, so I can tell you all about our two-part, 100% guaranteed cure-all!"

Meet Silly Patric-HA, our new favorite person in the entire world. Her set is everything we love most about middle-aged New York ladies: She thinks she's hilarious, she doesn't care if anyone else is laughing, she's corny and endearing, and her son is in the audience laughing so hard it sounds like he's choking to death. Immediately after she leaves the stage, the MC says, "I don't know what just happened." Her best line:

"I went to see this corn grower, he keeps stalking me. He was a colonel (kernel) in the army, and he's trying to butter me up! He likes husky women, so I have a chance! He's not very appealing though - I think he's kinda corny and full of CROP! He's probably gonna plow me over and play the field...OHHHH, my time is up!"

Introducing the self-proclaimed "Middle-Aged Woman Rapper," who nearly killed us at :40 with the most incredible beat boxing we have ever, ever heard. She calls herself the 'love child of the 'Black Eyed Peas' and Napoleon Dynamite,' which might officially earn her the title of 'Most Self-Aware Person Alive.' Her best line:

"Bump and grind at a teenage rave, can't go out 'till the upper lip's shaved! Gotta turn up the car stereo, drivin' and jammin' with my R.E.O. Bustin a move for my nephs and nieces, they so embarassed by my wools and fleeces! That's all I got, the rhymes all done, better put the hair back in a bun. "

Now that you're feeling better, we recommend a regular regimen of the following, courtesy of PatricHA: (Make sure you make it past 1:30, that's when it really kicks in.)

Merry early Christmas, and god bless us, everyone.

Next: Check Out These Terribly Photoshopped Fake Celeb Nudes
Categories: Funny, Videos
Comments
Leave A Comment
Back To Top